Welcome to Word Academy Schoolkid pack. In order to play this pack, first you have to pass the Sandbox pack.

Word Academy is a brain-bursting Word game you should download right now. Word Academy is not your typical word game that you can find in Play Stores and App Stores today, because this game challenges the every bit of your brain to squeeze out your creative juices in identifying the best word each game grid hides. This is a level-based experience game that if you are not into words and has a poor vocabulary, you’ll probably end up scratching your head thinking what is the best word hidden in the grid for you to advance to the next level.

By clicking on each level you will be redirected to the level page, where the answers are given by videos.

Finished Word Academy Sandbox? Just pass on the other pack, Word Academy Zombie Answers.
If you want the answers to a different pack just go to the home of Word academy answers. 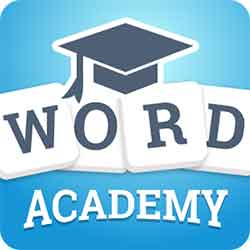 This is the latest game of Scimob, the same company that developed games like 94% and 94 degrees. Word Academy can be played on both Android and iOs devices. At the time of this article, there is no version for Facebook users.

If you still have problems, let us know by commenting below. We will replay with clear instructions as soon as possible.

PS: If you are searching for the answers of another game, please let us know using our contact form.